New Strength in the East
Crespel & Deiters in Dresden …

Gustav Deiters struggles to retain his composure. It is 1990, 52 years after the purchase of Klopfer Nährmittelfabrik and the expansion of the plant to the Saxon annexe of his family company. He looks out across the premises of the former Crespel & Deiters factory in Dresden. Not much has remained of what used to be the most modern starch factory in Europe. There, where wheat starch specialities used to be manufactured at full throttle and the famous Weizenin was produced, 38 years of nationally-owned-enterprise management has left its mark. The floor is contaminated with poisonous waste water, and the building itself is in a desolate state of neglect. And this although everything looked so promising in the beginning …

The Way toward the East

In 1938, Crespel & Deiters bought the empty factory of the life reformer, Dr Volkmar Klopfer, in Dresden. The vegetarian by conviction manufactured nutrient-rich bread, meat- substituting noodles and nutritious protein products here for many years. He probably was too far ahead of his time. Because, as visionary as his products were, he had big problems to succeed at keeping his company accounts balanced. So as to avoid bankruptcy, the company was liquidated by the nature-loving and socially-committed Klopfer in 1936. Two years later, Crespel & Deiters acquires the premises.

Already for quite some time, the Ibbenbüren wheat starch specialist has been playing with the idea of expanding its production in the east of Germany to improve supply to the middle- and east-German areas. For this purpose, Crespel & Deiters already leases a wheat starch factory in Braunschweig, Lower Saxony, in 1929. The plan is to develop the plant as a production site for a successful market launch of Weizenin, which is entered as a trademark in the same year.

However, owing to the limited possibilities for technical expansion in Braunschweig, and the necessity of having to make larger investments, the company takes the decision to close the plant in Braunschweig and to start looking around for an alternative. With the Dresden plant, Crespel & Deiters finds a good foundation for additional expansion.

A Fresh Breeze along the Elbe River 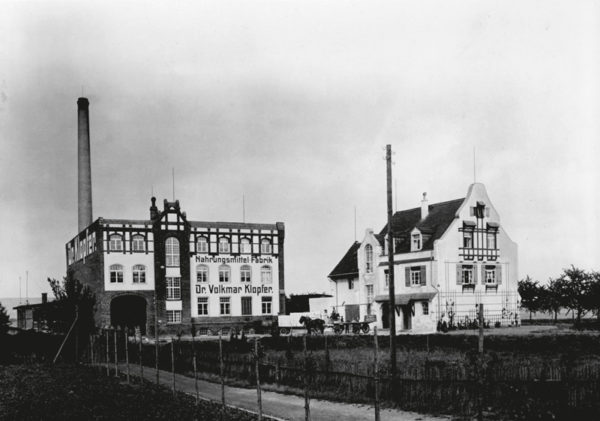 1938: The Dresden plant before the expansion into the most modern starch factory in Europe.

Work is immediately started on modernising the plant. The operational facilities are technically expanded. The already existing two buildings are now accompanied by four more that are built in addition to these. Crespel & Deiters Dresden now has a complete mill complex, a silo, a dryer unit and a flour blending section. A second building accommodated the power station, with a boiler system and a steam engine. What is more, the factory also accommodated a laboratory plant, a bakery and a pasta produce plant.

Following completion of the construction work, the plant presents itself as the most modern of its kind at this time. In so doing, Crespel & Deiters lays the foundation for 14 years of successful production of tried-and-tested and new wheat-based products in Dresden. 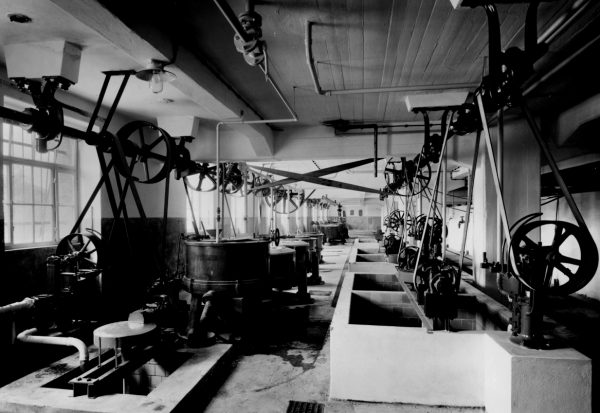 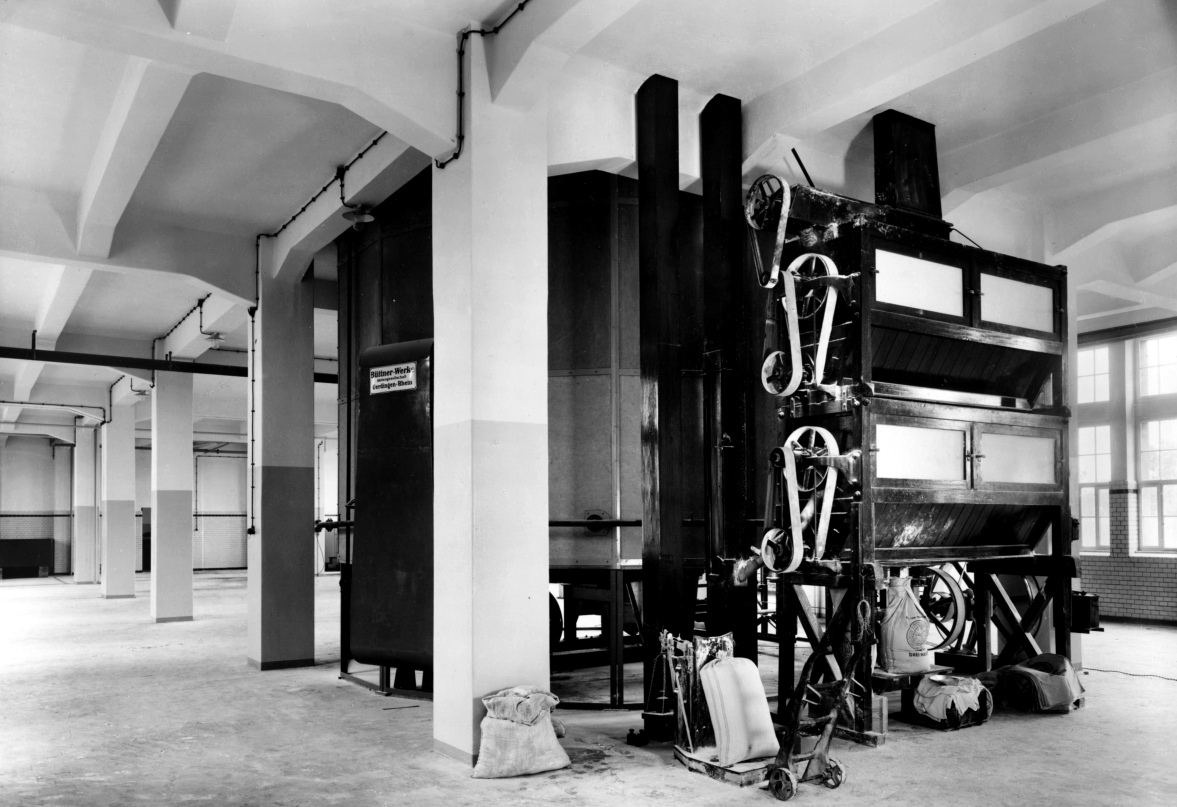 Crespel & Deiters is on Everyone′s Lips

From now on, Crespel & Deiters produces wheat starch products for the food industry in Dresden. The company recognises the high physiological value of wheat protein early on already and processes it in the laboratory. Especially manufacturers of soups and soup seasoning make use of the thus created wheat gluten for improving the flavour of their products. With Weizenin, Crespel & Deiters also produces an own brand product for its end consumers. The pure wheat starch powder guarantees that the goods turn out well and ensures the perfect texture of cakes, tarts, desserts, sauces and soups. Businesses, bakeries and manufacturers of baby food in the whole of Germany source their wheat starch powder from Dresden. It is this successful product of Crespel & Deiters that is subsequently continued in “VEB Weizenin” (people-owned enterprise Weizenin), and which goes on to give the state-managed GDR fabrication its name.

The 2nd World War ends in 1945. Dresden and, as such, also the factory of Crespel & Deiters is now on territory occupied by Russia. Initially, this still has hardly any impact on production. Until the start of the 1950, its business as usual at the Dresden plant. However, with the founding of the GDR, daily life changes dramatically in the Russian-occupied zone. The new government in East Berlin declares war on capitalism and therefore also on the companies located there. The companies are to become publicly owned. The expropriation of private companies begins.

In 1952, Crespel & Deiters Dresden is expropriated. The factory, its machines and the premises pass over into the possession of the German Democratic Republic without any compensation for loss. For this, the new regime makes use of a legal ruse. During and after the War many materials were scarce. To ensure that business could be kept going, things were bartered. From a legal perspective, this was called “compensation”. Although it was inadmissible, it was often necessary for productions. The accusation of compensation gave the new state a reason to expropriate the companies.

Crespel & Deiters was also accused of this compensation. As a result, the chief operating director of the Dresdner plant is arrested and sentenced to 15 years in jail in Bautzen. Fortunately he is released again after two-and-a-half years, which is thanks to a mysterious course of fate. As a soldier, he served in the punishment unit 999 during the War. Which is where he saved a prisoner’s life. This prisoner subsequently worked in the Dresden factory of Crespel & Deiters. As a communist arrested during Nazi reign, he gained considerable influence following occupation by the Russians, which he used to release his former lifesaver. Following his release from Bautzen, the former plant manager of the Dresden factory goes to the west, where Crespel & Deiters provides him with fervent support in setting up a new existence.

The Reunification and the End

Weizenin becomes a moneymaker in the East. In VEB Weizenin, the former factory of Crespel & Deiters in Dresden, the innovative wheat gluten is produced further under the government’s auspices and advances to become a typical GDR product. To this very day, Weizenin, which meanwhile is being produced by Unilever, is very popular in East-German nostalgia stores. The reunification in1990 also sees the end of the planned economy in the east of Germany. Many expropriated companies are returned to the original owners again. Also Crespel & Deiters sets off to the east of Germany, to the former Dresden plant. What the Ibbenbüren wheat starch specialist finds on site leaves little hope that a new production era can be started in Dresden. The technical, ecological and financial structures of VEB Weizenin are too desolate. The decades of over-exploitation of the premises and the surrounding nature has taken its toll. The company can no longer be continued. Crespel & Deiters decides against taking back the company. The premises and the building, which today in part are listed objects, are sold to the food producer Zamek and the mineral oil Aral Group by the Berlin privatisation agency. Only Weizenin, the invention of Crespel & Deiters, lives on in the new federal states to this very day.