Wheat-based meat alternative promises a crispy outside and tender inside

Zwingenberg/Germany, February 2022 – The latest innovation from ingredients specialist Loryma is a combination of wheat-based components for a vegan version of chicken thighs, which is more than a match for this classic dish in both appearance and texture. The replication of the chicken skin is achieved with a specially developed coating system, while Lory® Tex wheat texturates with a highly functional Lory® Bind binding system imitate the fibrous muscle meat. By frying, deep-frying or grilling, the outer shell becomes crispy, while the inside remains juicy and tender. Manufacturers who adopt the concept can adapt and flavour it individually.

The creation of an authentic, vegetable “chicken skin” – not yet on the market in this form – is achieved by Loryma with the help of a specially developed wheat-based coating system. It is applied as a flowable oil-in-water emulsion to the shaped imitation meat by means of conventional coating technology, as used in wet panades. The contained functional mixture of wheat proteins, starches and gelling agent (Lory® Stab) creates an elastic, irreversible, thin surface coating that convincingly reproduces chicken skin and becomes crispy during the final preparation. 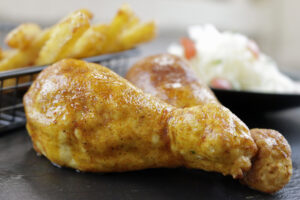 The coating also protects the meat alternative inside from drying out. This consists of Lory® Tex Chunks, particularly long-fibre textured wheat proteins, which perfectly imitate the texture of grown muscle meat thanks to their unique structure. The tasteless dry texturate can be easily rehydrated with water, flavoured and separated to the desired fibre structure. In combination with Lory® Bind, this creates a mass that can be formed for example into the form of a chicken leg and coated.

Norbert Klein, Head of Product Development at Loryma, says: “Recreating crispy chicken skin with purely vegetable ingredients was a real challenge, yet we are more than satisfied with the final concept. It’s just right for everyone who wants to give up meat but not this classic treat.”